Plenty Of Merit In This Win 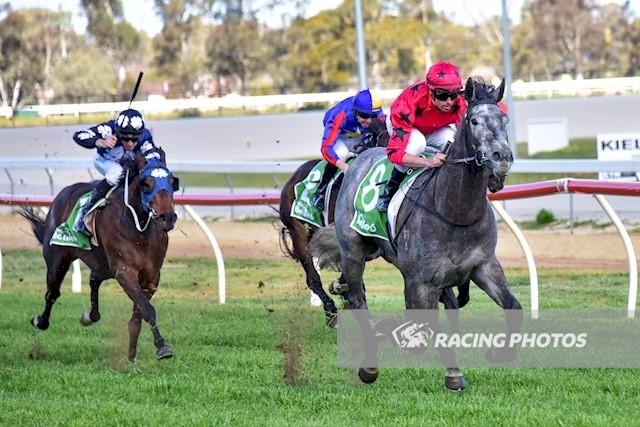 How nice it is on those rare occasions when everything goes right in a race; it makes for exciting viewing and much joy on the line as a horse is presented with the chance to show just what he is made of.

As was the case with the promising Legion Of Merit at Swan Hill on Monday, the lightly raced three-year-old always travelling well behind the pace for Billy Egan who had him off heels and into clear running early into the straight.

And it was soon over, Legion Of Merit chasing down the leaders and putting on display a good turn of foot as he drew clear to win by a soft and impressive 2 3/4 lengths.

Sent out favourite in the 1300m maiden having caught the eye with a fast finishing third at his debut two weeks ago, the attractive grey looks to have a bright future.

“It was nice to see him winning in good style considering that he is still a bit green,” Egan reported whilst Freedman was happy that the young horse has come so far.

“He was a difficult horse in his younger days – he was a bit frightened of everything. But the staff at home have done a great job with him and he is working his way to being a complete racehorse now.”

“He is a horse with a lot of promise,” he continued, “and we will look after him and take him through his grades. He is still learning… he may go to Adelaide in a couple of weeks or may go out for a little break, we will see how he pulls up.”

Purchased for $125,000 in New Zealand last year, Legion Of Merit is a son of O’Reilly’s four times Group One winner Alamosa and the Group Three placed Any Suggestion mare Fantastic Honour.

A descendant of the famed matriarch Chelandry, Legion Of Merit has as his fourth dam the AJC St Leger and Adrian Knox Stakes winner Chaleyer, grandam of the Group winners Marrok and Appeal Process and third dam of the Group One sprinter Music Magnate.