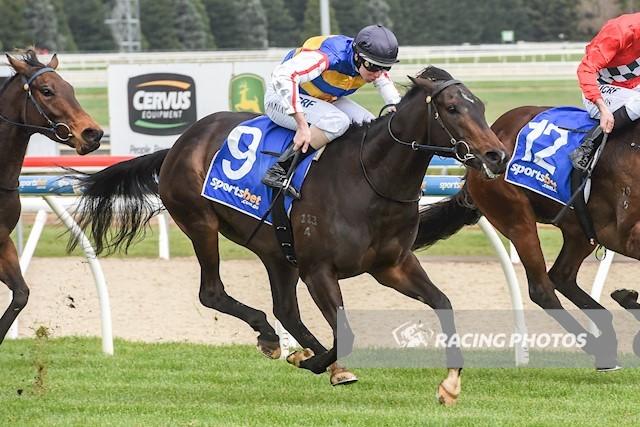 Sent out favourite with a drop in class at Ballarat on Sunday, Gina’s Hope was seen back to her best with a barnstorming victory in the BM64 1200m contest.

Not far away at her previous two outings at Sandown, the still lightly raced five-year-old was able to hold a good position on the rails from the inside gate, travelling well midfield for Damian Lane.

There was a bit of work to do in the run home as those on the pace gave a kick but Gina’s Hope was strong to the line.

“We had a nice run,” Lane reported – “things panned out well and I was able to get her into the clear at the right time.”

“I was worried for a couple of strides as the leader kicked strongly but she really knuckled down to her work late.

“I don’t think she loves this soft ground but she is getting through it and doing the job,” Mitch Freedman said, hoping that he can now get Gina’s Hope into winning form at metropolitan level.

“She has been a bit frustrating as I thought she would’ve won a city race by now this time in but today is a good result and there is a race at Moonee Valley coming up for her.”

A three times winner from just nine starts, Gina’s Hope is a home-bred for Michael Hirst but the outstanding stallion Written Tycoon out of the two times winning El Moxie mare Elle Of A Westerly who is due next month to Starcraft.

Gina’s Hope hails from – and is line-bred to – the family of one of the greats of the Australian turf, the legendary sprinter Vain.