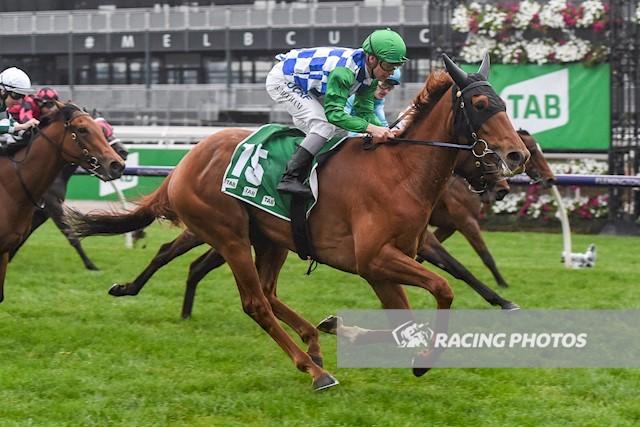 Every young trainer wonders who that first “it” horse is going to be, the one who has that special something, that turn of foot, that class.

Just a few years into his training career and Mitch looks like he has found that horse – the exciting filly Moonlight Maid who created such a big impression charging from the rear of the field to claim victory in the Gr.2 Edward Manifold Stakes at Flemington on Saturday.

Big odds having just her fourth start, Moonlight Maid had derived great benefit from her first up run at Bendigo and the expanses of Flemington were always going to suit the backmaker who at only her second outing was an eye-catching Listed Carmichael Stakes fourth over the same trip (1600m) at the same track.

A home-bred for Gerry Ryan’s Limerick Lane Thoroughbreds and John Sutcliffe, Moonlight Maid was her sire Puissance de Lune’s very first winner – and now his first stakes winner whilst his other exciting spring prospect Southern Moon (a close and somewhat unlucky Derby Trial second at Flemington recently) is also a member of our stable!

Which is apt with Puissance de Lune being a big part of Mitch’s racing life when he worked for the Weir stable – the classy grey always a favourite.

As was Moonlight Maid’s dam Manhattan Maid who was also at the stables at the time during which Mitch was foreman – making Moonlight Maid a very special horse indeed.

“It is a huge thrill,” he said – looking more than a little shellshocked!

“She came back from the paddock wanting to really pull hard in her work… one day she just took off on her rider!”

“It has been a lot of hard work to get her to switch off and every one at home has done such a great job with her.”

“People may have wanted to pot her first up run but she was a bit ring rusty, she pulled and got bullied around a bit but she came on so much from it – she really blossomed.”

“When she drew 19 I was spewin,” he laughed, “but it worked out as they kept wanting to put the heat on and Benny rode the perfect race.”

Whilst hardly confident that Manhattan Maid was a good thing, Mitch was expecting a nice effort with the chestnut always displaying her fair share of talent.

“She has showed us a good amount of ability all throughout her time with us,” he said.

Moonlight Maid is the second foal and second winner for the stakes winning Choisir mare Manhattan Maid who was also bred at Limerick Lane and raced by John Sutcliffe… and he raced Manhattan Maid’s Take Manhattan too!

Several generations of nice horses here but Moonlight Maid may be the best of them and there are exciting times ahead with jockey Ben Melham impressed.

“She has a good turn off foot,” he said – “her sectionals running home were really good.”

“In the big field I didn’t have many options from the outside draw but to go back but the short run to the first turn generated a good tempo and she switched off well.”

“The race was set up beautifully for her and I saved her for that last crack at them.”

For much of the straight so far off the leaders that she was not on the television screen, Manhattan Maid really charged over the final 200m and she had her rivals well and truly covered on the line saluting by 3/4 length.