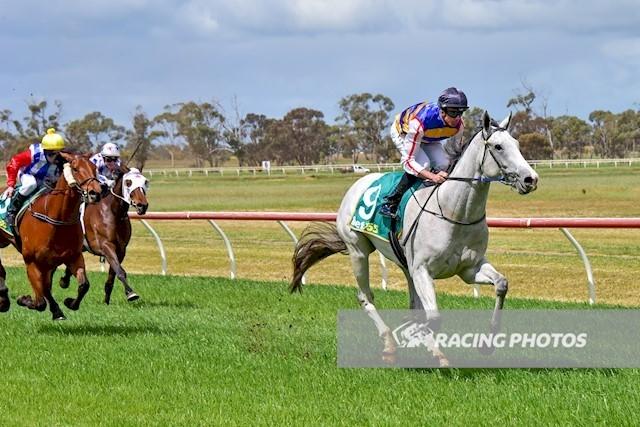 “Good luck in the Derby son,” declared caller Ric McIntosh as odds-on favourite Southern Moon raced away to a dominant victory in the 2000m maiden at Donald on Tuesday.

It was a well deserve break through for the exciting grey who had stormed to the line in the VRC Derby Trial at Flemington at his previous start, unlucky having been held up at a vital stage – only just missing out on the prize.

It would’ve been nice to win that race which provided automatic entry into the VRC Derby early next month but we still have a very exciting horse on our hands and there are a couple of good Derby lead-up races for him coming up.

“It is unfortunate that we didn’t get that golden ticket last time,” Mitch said, “but there are two likely options for him – we will head to either the Geelong Classic or the Moonee Valley Vase.”

Mitch was understandably delighted with the ease of Southern Moon’s two length victory and is confident that he can continue to progress.

“You would think that with the way he has gone around today he will pull up well – it should not have knocked him around much.”

Having raced only four times, Southern Moon is impressive in his professionalism with Mitch noting that “the great thing about this horse is that he has got a great attitude and a great constitution… and we are looking forward to seeing what he can do in the next month.”

Having his first ride on the gelding, Billy Egan was happy – “he gave me a really nice feel and won as people expected him too. He will get a good confidence booster from that.”

Billy was also taken with the way in which Southern Moon did everything right despite his relative lack of experience – “it is good to see a horse knowing what he is doing so early in his preparation, that is credit to Mitch’s training ability.”

Inheriting his sire’s colouring, Southern Moon is is the third foal and second winner for the Terang winner South Street who was also bred and raced by Hirst… and he bred and raced that mare’s dam On Southbank as well!

In foal to Jimmy Creed having produced a full brother to Southern Moon last September, South Street is a daughter of Street Cry whose Irish Oaks winning dam Helen Street is the grandam of Puissance de Lune’s grandsire Shamardal.

As well as this interesting 4 X 3 cross of such a high class mare, Southern Moon also carries duplications of his Kentucky Oaks winning ancestress Lalun, dam of the prolific stallions Never Bend and Bold Reason.