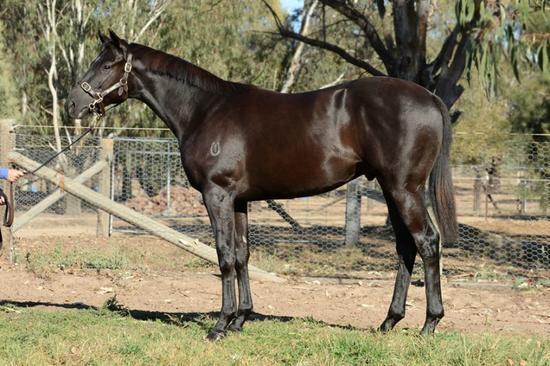 It is always a great thrill to prepare a winner for a good bunch of owners, all the more so when they are locals - such as the happy group who cheered on Leishman to an impressive maiden victory at Hamilton on Friday.

Jumping fast, Leishman was the early leader but was able to take a sit after initially facing the breeze. Rejoining the leaders early in the straight, he got the upper hand from the 250m, racing greenly but maintaining a good margin to the line.

Saluting by a soft 1 1/2 lengths, Leishman did a great job saluting at just his fourth outing, stepping up to 1400m and striking rain affected going for the first time.

Part owned by well known Warrnambool trainer Colin McDonald who purchased the son of Skilled for just $8000 at the 2015 Inglis VOBIS Gold Yearling Sale, Leishman has always shown ability but has been just a little backward.

"We've had to be patient with him," Mitchell explained, "as he has been pretty immature."

"But his run at Mount Gambier over 1200m last start was good, he really surged over the last 100m so I thought the 1400m would be ideal for him."

The addition of blinkers made Leishman all the more hard to beat and connections went into the race with a degree of confidence, Mitchell mindful that Commands line horses have a good record in wet conditions.

"He was aided by a good ride by Liam Riordan and he travelled strongly into the bridle the whole way."

Riordan was happy throughout the race, reporting that "he travelled very well and probably got there just a bit too soon, he wanted to wander around a bit.

"He handled the ground well though I think the gear change was the key," he said, adding that he feels Leishman can be just as capable on good tracks.

"But it is good, with the Warrnambool carnival coming up, that he can handle the wet."

Leishman is the final foal produced by the very good race mare Chantilly Rose, a Group Three and two times Listed placed daughter of Jetball who won six races from 800m to 1400m.

This is a strong New Zealand family, Chantilly Rose - dam of another two winners - being a half-sister to the Group One Thorndon Mile winner Happiness, in turn dam of the Listed winner Zankel.

Other members of this family include the stakes winners Young Ida, Life Begins, Just Anything, Heguy, Coachwood and Danza Lad.