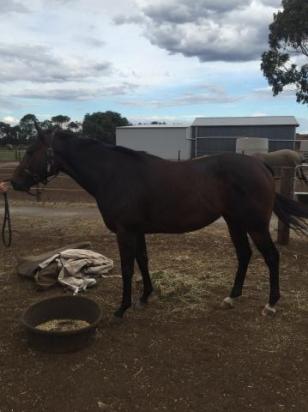 Saturday was a great day for the stable with our three runners doing us proud - Mrs Bignell and Hard Up providing us with a running double at Horsham whilst the promising Greviste measured right up to city class with an eye-catching run at Flemington.

Making her debut for the stable, Mrs Bignell was first up since late last year and she really looked the goods breaking her maiden over 1200m.

From the 150m she was able to get clear with her winning margin an impressive two and a half lengths.

"Her previous trainer Greg Baker sent her down to us," Mitchell Freedman said.

"He told me that she possessed good ability but had not really been showing it on race day."

"But she showed us good talent in a couple of jump-outs and she can now head into a ratings 58 race which she will prove very hard to beat in."

We did not have to wait long to cheer again with Hard Up (pictured) taking out the following race, creating a good impression leading throughout over 1200m.

The word was out that the son of Hard Spun had ability and he was kept very safe in the betting. Showing good natural speed, he jumped straight to the lead and his rivals off the bit before the turn.

"He is a natural runner," Mitchell said.

"He is a very competitive horse with a huge will to win. He has shown a liking of heavy ground and we think he possesses metropolitan ability."

Bred by his happy part owner Michael Hirst, Hard Up is the second foal and second winner produced by the imported Street Cry mare Broadway Ellie.

Served last spring by Artie Schiller having produced a colt by Toorak Toff, Broadway Ellie is a daughter of the Canadian stakes winner Marisa Go whose fourth dam is the Kentucky Oaks heroine Lalun, an influential broodmare.

Meanwhile at Flemington our promising three-year-old Greviste caught the eye with a game placing over 1400m. Beaten just 1 1/2 lengths, the imposing son of Stryker took a gap when it came and found the line well.

It was just his sixth start following on from a winning double and a somewhat unlucky fifth in strong company at Caulfield. Onwards and upwards!