Two Out Of Three for Mrs Bignell 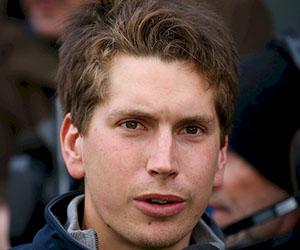 What a great addition to the stable Mrs Bignell is proving, the gutsy mare at Donald on Monday recording her second victory from just three starts to us.

Sent to Warrnambool on the advice of her previous trainer Greg Baker, the daughter of God's Own has thrived in her new environment - "she is trained out of the paddock and spends time at the beach and really seems to be enjoying it," Mitchell said.

It was a race of tactics for Mrs Bignell who had drawn the outside gate of 13.

"I said to Luke (Currie) to sum it up in the first 50m - if she pinged well, get across as there did not look to be a lot of speed on."

And that is how it turned out, Currie doing a great job to have Mrs Bignell travelling nicely in fourth position - hooking off the leader's back early in the straight and balancing up.

Patiently handled over the final stages, Mrs Bignell hit the lead late and looked to have plenty in hand winning by a soft half length.

"She quickened well," Currie reported, adding that he did not want to get to the front too soon - "you don't win races at the 200m," he chuckled, "you win them at the finishing post."

Currie was happy to get Mrs Bignell into such a good position early noting that "there is not much of her so I did not want her to have a tough run."

A daughter of the Canberra Cup and Wagga Gold Cup winner Regal Touch, Mrs Bignell is raced by Rupanyup Panthers - many of whom were on course to welcome their pride and joy back to scale.