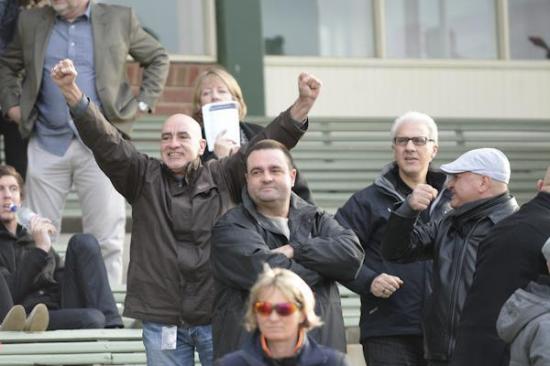 What a weekend it has been, first a game win by Honey Magic at Donald on Saturday and then a Sunday double with Miss Excess gamely claiming her maiden at Pakenham whilst Poetic Ray could not have been more impressive rising in both class and distance and bolting in at Warrnambool.

It was certainly a deserved break through for Miss Excess who was having her seventh start on the back of consistent form.

Settling back from a tricky outside gate, she was nicely ridden by Ben Allen who had her wide into the straight - spotting her rivals several lengths but into the clear and ready to chase.

And chase she did, reeling in her rivals before engaging in a late three horse battle, doing best where it mattered.

"It was nice to see her break her maiden in such good style," Mitchell Freedman said.

"She has taken a while to get fit but she is proving a tough filly accomplishing so much in her first campaign."

By Danzero's fast son Kaphero, Miss Excess is out of the city winning Prego mare Preietta - also dam of the five times winner Click Up.

Miss Excess had been runner up in the stable quinella at Warrnambool a couple of weeks ago and that form held up - and in a big way with the winner of that race being Poetic Ray.

On that occasion successful in a 1400m maiden, he stepped up to a 1700m BM64 at Warrnambool - that test seeing him sent out at double figure odds.

But it is doubtful that punters will overlook him next time out - so dominant was his victory, his second from just three starts.

Settling back before making a steady run, Poetic Ray cruised up to his rivals straightening and away he went - his winning margin a soft 2 1/2 lengths.

And it was a win that impressed jockey Jarrod Fry who has been aboard the three-year-old at each start.

"At his first start he was quite keen, right up on the bridle and a bit erratic. Last start he got back and switched off and hit the line well which he did again today. He got a bit keen when the tempo slackened off around the back buthe is improving at every run."

"It is hard to win again after winning the maiden, only the good ones do it and it's a sign of things to come.""

Mitchell agreed - "he just keeps improving. He is showing a good liking for wet ground and I will be interested to see how he performs on top of the ground."

"Regardless he looks to have a good staying future."

By Dubawi's high class son Poet's Voice, Poetic Ray is out of the dual city winning Perugino mare Iris In The Glen. Judging by her form (she won up to 2400m and was fourth in a Bagot) the best is still to come for her exciting son!