OWNER OF THE MONTH - MICHAEL MCGRATH 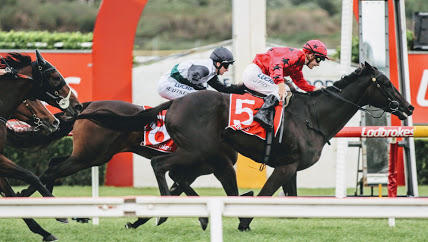 One of the highlights of the season just passed was watching the progress of the promising Greviste who this year has won two races (Sandown and Moonee Valley) for the stable.

It has been particularly satisfying as the lightly raced four-year-old is part owned and managed by Michael McGrath who has been such a loyal supporter of our's from when we first set up.

Michael was a part owner of Sophrosyne and Shenzhou Steeds, both horses who came from a large Flemington stable to be rejuvenated by the healthy beach air and water!

"Both horses had their problems," Michael recalled, "and Mitchell did such a good job nurturing them back into form, that is his main strength, he is so patient with them, they are never rushed."

Sophrosyne and Shenzhou Steeds both won metropolitan races for the stable, securing Michael as a firm Mitchell Freedman fan!

And so, a couple of years ago when Mitchell mentioned that he would like to bring more youngsters in the stable, Michael readily agreed to be part of the project.

Which led to Mitchell attending the 2015 Inglis Melbourne Sales where a son of Stryker caught the eye, secured for a bargain price of $36,000.

And that horse of course, is Greviste who has already won over 4 1/2 times his purchase price - hopefully with much more to come.

Always quite laid back at the races, describing himself as "naturally pessimistic" when it comes to the winning prospects of his horses, Michael admits that Greviste has had him more on edge than usual.

"For the first time ever I have got really nervous when he runs," he said, "I think it is because we could see early that he had something."

Whilst not raised in a racing household - "my family was more into sailing" - Michael soon became aware of the sport as he attended St Bede's College in Mentone.

"It was just down the road from Epsom and there were racing people everywhere," he said, laughing as he added that as his interest in racing deepened "my studies suffered a bit!"

Dabbling in shares in horses "here and there," Michael became a more prolific owner once he had established a successful business - and his wife Annette is fully supportive; "she loves it even more than I do."

Having syndicated Greviste, Michael also found owners for a Congrats colt purchased last year and he is looking forward to that that young horse - who has been christened Bravo Tango - debuting this weekend.