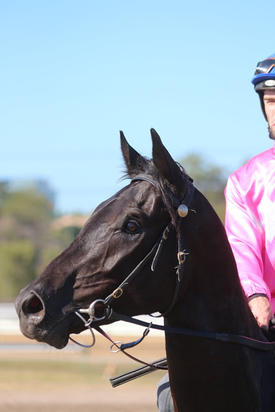 The first of those being the handsome Geodesic.

Having just his third start for the stable, the former Flemington trained galloper had been unlucky not to break his maiden at his previous outings when blocked for runs but it was clear sailing to the line this time.

Settling back from a tricky gate in the 1800m contest, the eye-catching black five-year-old made his run from before the turn, taking the gaps as they came before hitting the lead heading into the straight.

It may have been a bit soon for Geodesic who is still not quite sure what to do once getting to the front but he was tough to the line, holding off a late challenge by the strong finishing San Gregorio.

Much to the delight of an excited group of owners who were cheering on from different spots in Victoria, Tasmania, Queensland and South Australia. They are a particularly patient group with their horse somewhat unlucky not to go close when a fast finishing fourth at his Ballarat debut back in February last year.

"It was nice to see him follow up on a good showing last time out," Mitchell said.

"He hit the front and was not quite sure how to go on with it!"

Warrnambool life has suited Geodesic who is the second foal and second winner for the stakes placed dual city winner Deraismes.

Part of a big day for his Aquis Farm based sire Domesday, Geodesic is a half-brother to the talented The French House who unfortunately damaged a tendon when being set for the Australasian Oaks.

Whilst The French House (who is owned by a few of the Geodesic group) is due in three weeks time to Toronado, Deraismes (a descendant of famed matriarch Pretty Polly) has had a year off and will visit Cluster at Larneuk Stud this spring.