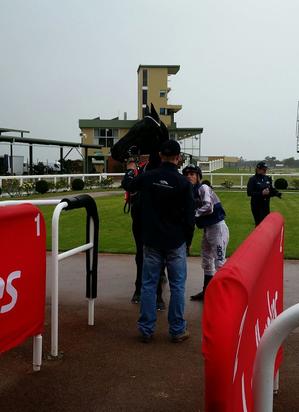 Winning is always a great feeling but all the more so when doing so with a horse who is much loved by a loyal group of owners as is Geodesic!

At Sale on Tuesday stepping up to 2232m off an encouraging run over 1800m at Horsham, the Domesday gelding jumped well - wide to the first turn to position outside the leader before taking a sit fourth on the rails as others came around him.

Coming to the turn it was just a matter of getting a run through with the handsome black travelling sweetly for Jarrod Fry who was having just his second ride on him.

Geodesic quickly took the split as it came, wearing down the leader and shaking off the odds-on favourite Queen Leonora before racing away to win by an easy 2 1/4 lengths with his ears pricked.

"He relaxed beautifully, got into a lovely rhythm and was right there ready to pounce," Fry reported, adding that "as soon as the gap appeared he really lengthened, relishing the extra trip."

"He ran a good race at Horsham last start - he just had to go back from a wide gate and it is hard to make ground at that track but he still ran on well and it had him peaking perfectly for today."

Geodesic's second success came at just his third run back from a spell with Mitchell training him differently this time in.

"Last preparation we had a lot of trouble getting weight off him and we have tried to keep him a bit more tucked up this time in," he explained.

"His lactate tests on the treadmill have been terrific so we were keen to step him up in distance."

"We have lengthened his slow work and kept his gallops short and sharp to try to keep the weight off him and it seems to be working well - he is a happy horse."

"And it was just a lovely ride from Jarrod, he took the initiative to be forward enough, had a rest throughout and exposed him at the right time."

"The horse got through the ground well and was really strong to the line."

"He has been an honest customer and it is good that he has got a second win on the board for his owners who are in love with him!"

It was certainly a matter of love at first sight for each of Geodesic's owners, the horse they know affectionately as "Marty" catching the eye right from the start.

Stamped considerably in looks by his good-looking sire Domesday, Geodesic was bred by Tim and Brian Kelly out of the stakes placed dual city winning Grand Lodge mare Deraismes.

Holding her in high esteem, one of Deraismes' part-owners Kristen Manning was keen to be part of the careers of her progeny and was delighted to be given the opportunity to find owners for her first two foals.

The first of those - the Dylan Thomas filly The French House - was close up in stakes races on two occasions before her career was brought to a premature end by injury... whilst Geodesic is her second.

Served last spring by Larneuk Stud's Cluster, Deraismes has unraced Reset fillies in work with Michael Kent and Darren Weir. She is a daughter of the Listed winning stayer Assertive Lady and is a descendant of the famed matriarch Pretty Polly.

Geodesic has proven to be a consistent performer since joining the stable, his seven starts for us yeilding two victories, a second and four fourths.