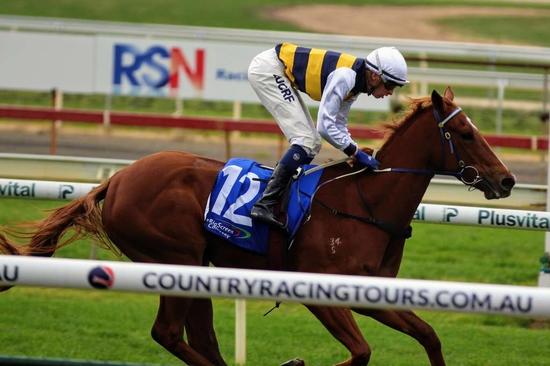 Providing the beginning of a great day for the stable - two runners, two winners - Gregorian Chant is an exciting filly who looks to be going places on the back of a dominant maiden victory at Bendigo on Sunday.

A short priced favourite having run so well without a great deal of luck (sitting wide) at her Moonee Valley debut, the attractive chestnut again did a bit of early work before eventually gaining cover mid-field.

Travelling well for Michael Dee, she was clear into the straight and was quickly chasing the three leaders, hitting the lead with 200m and racing clear to win by a length with her ears confidently pricked!

"She had taken a good bit of natural improvement off that first up run," Mitchell said, impressed by just how well she pulled up from that demanding contest.

"She had a pretty tough run out three wide posted on the speed, I thought she was entitled to drop out in the straight but she toughed it out and found the line well."

"She bounced off that run really well, did well in the feed bin and pleased us at home so I thought it was a good idea to take her to the races again - and the step up to 1400m today was ideal."

"She got a bit fired up early," he continued, "but it looks like she is slowly picking up her craft. I don't think she loved the going but the fact that she is going to get out a bit further and that she has probably got a bit of class on her side enabled her to get the job done."

Due to have a break, Gregorian Chant will either have a crack at the spring or be saved for Adelaide a bit later on - "she is still learning," Mitchell said, "and we won't rush her."

"She didn't really handle the ground that well and she is still very very new - she won on pure ability and there is a lot to come for her."

"Once she learns and takes it all in her stride and gets a bit of confidence I think she'll go a long way... and she will definitely get up over 2000m. As soon as I got cover she relaxed beautifully, she almost came back too much underneath me!"

An OTI Racing purchase off a trial in New Zealand, Gregorian Chant is a daughter of the regally bred Port Adelaide Guineas winner Echoes Of Heaven - full brother to successful stallion Manhattan Rain and half-brother to champion stallion Redoute's Choice.

She is out of the winning Viking Ruler mare Norse Affair, also dam of the winner Tavlin from the family of stakes winners Focal Point, True Colours, Spray and Over To You... and futher back this is also the family of successful stallions Miswaki and Southern Halo. Served last spring by Power, Norse Affair has a weanling filly by Tavistock.