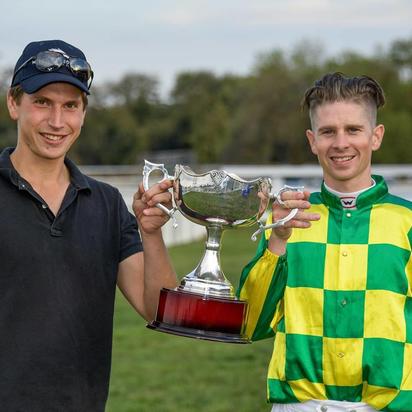 Four starts for the stable - three wins, the impressive record put together by the gutsy mare Pelonomena who showed so much heart claiming Sunday's $70,000 Terang Cup.

It was a third win in a row for the daughter of Melbourne Cup hero Americain and she had to dig on all of her reserves in a race during which the pressure went on a fair way from home - thanks to Beyond Thankful who took off Vo Rogue style!

Originally in a lovely position on the rails, not far behind the leaders, Pelonomena ended up spotting them several lengths as she entered the straight but as the front runner tired she began to build momentum.

But at the same time the race favourite, the Colac Cup winner Golden Authority, was also making his run and from the 150m the two drew clear to fight out an exciting finish to the 2150m contest.

And it was our girl who got the upperhand late, showing the same heart that has seen her successful at five of her 14 starts.

"She had to be tough," Mitch Freedman said.

"They took off a long way out and put that pressure into the race... but she dug in and really wanted to find the line."

"She relaxed so sweetly for me," said a delighted Jye McNeil, "and we were able to follow the favourite into the race... he was fighting but my girl was stronger over the last 100m."

It was McNeil's first ride on the bay and he was impressed - "she is definitely one to watch for the future."

Just what that future is remains to be decided by there are Warrnambool Carnival options (including the Cup) enroute to the Andrew Ramsden Stakes at Flemington in late May.

"That race has been in our mind and we will work out the best way to get her there," Freedman said, adding that it was again a thrill to train a nice winner for John Richards who has been a supporter of the stable from when we first set up.

And an extra special win it was for Richards with Pelonomena being a home-bred. And a nice broodmare prospect for the future too, hailing as she does from the family of superstar Might And Power.