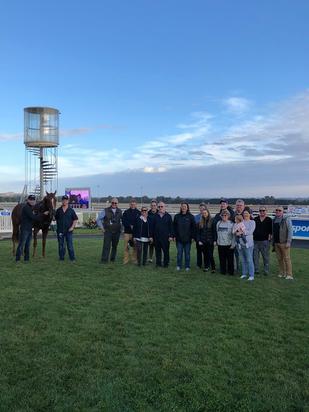 It was a month between runs for the up-and-comer Amerock but there was still an air of confidence surrounding the four-year-old as he returned to Ballarat on Tuesday - the chestnut up in weight but contesting a similar race to the 2000m BM64 contest he won late last month.

Ideally we had wanted to race the son of Melbourne Cup hero Americain sooner but it was not so easy to get him a run in the right race - but as it turns out, this one was worth waiting for!

"It is a credit to my people at home giving the good feed back in the morning," Mitch Freedman said, "just so that we know that the fitness levels are still there when they miss a run or two."

"The horse is going really well," he continued - "and I thought he was even more genuine today than last start, he took a gap and really flattened out well."

Jockey Jarrod Fry agreed - "the other day he got a bit lost and waited for the others but today he really raced away to the line, he is racing with good confidence."

"He travelled smoothly throughout the whole race and conserved energy. I just had to wait for the gap to come and when it did he showed a good turn of foot."

It was win number four for Amerock, one that saw his prize money tally increase to beyond $116,000 - a good result for his many happy owners including his breeders, the Bamford family.

Bred to appreciate the 2000m and beyond, Amerock is out of the Zabeel mare Miss Shamrock whose dam is the Gr.1 Australasian Oaks winner Irish Darling, also dam of the Listed winning stallion Fighting Sun.