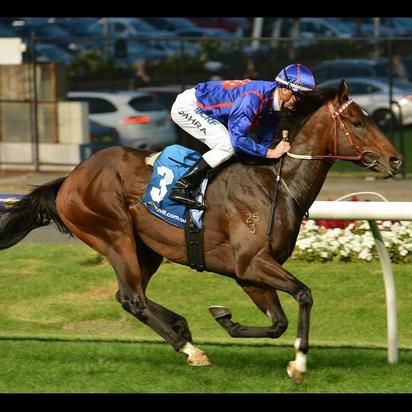 Adelaide had been a happy hunting ground for Artie Dee Two in the past and we were happy to take him back to Morphettville on Saturday - happier still when he charged home to record a convincing victory at just his third start for the stable.

Close up at his first two runs for us, Artie Dee Two was up in class but down in weight; well in with 56kg having been asked to carry 60kg at his previous outing in BM78 company.

Despite already proven at the BM82 level of Saturday's race, he was sent out at big odds - much to the delight of his loyal group of owners.

"He just needed those two warm up runs to have him at his prime," Mitch said, adding that he was delighted with the ride, noting that "he is not the easiest horse to ride and he got it spot on."

Artie Dee Two's success - his sixth from just 21 starts (amassing just short of $300,000 in stakes) - was part of a big day for jockey Clayton Douglas who later in the day enjoyed Gr.3 success aboard Declarationofheart.

A cleverly named son of Stockwell Stud's reliably classy stallion Artie Schiller, Artie Dee Two is a graduate of the 2015 Inglis Classic Yearling Sale. He is the second foal and first winner for the unraced Starcraft mare Star Logie, a half-sister to the Listed winner Wonderer.

A race on the final day of the Warrnambool Cup carnival is an option for Artie Dee Two or he may head back to Adelaide in a couple of weeks time.