Mrs Is A Big Winner 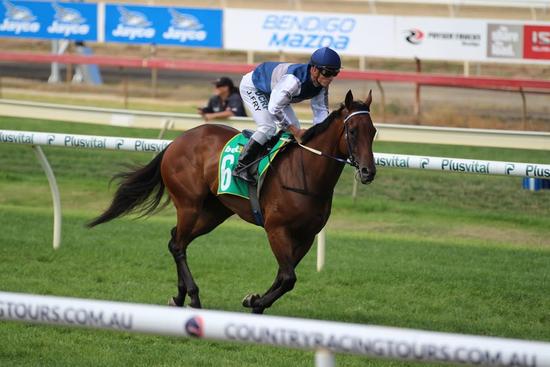 Every horse is different and one of the advantages of a hands-on trainer such as Mitchell Freedman as that he gets to know each one's quirks, thus getting the best out of them - which is why Mrs Bignell is now a five times winner despite still being a maiden when she joined the stable after 15 runs.

Saluting at her first run from our then Warrnambool base, Mrs Bignell has thrived ever since, equally as happy at Ballarat with Freedman figuring out that freshness is the key to the six-year-old's state of mind.

"She thrives when her runs are spaced," he said.

With a month between her latest two runs, Mrs Bignell was a happy horse as she headed to Pakenham on Thursday evening where, despite having been such a gallant second at her previous outing, she was sent out at nice double figure odds stepping up 1400m.

Settling well back for Jessica Eaton who is forming a good relationship with the mare, Mrs Bignell was into the clear turning, beginning her charge as soon as she was balanced - reeling in her rivals before racing away by 1 1/4 lengths.

"I had a lot of horse under me coming into the straight," a delighted Eaton - who has now won two races on Mrs Bignell - said, adding that "it was just a matter of the run coming and when it did she was too good."

"I dropped the whip at the top of the straight but clearly it didn't matter!"

Mrs Bignell's loyal owners - the Rupanyup Panthers led by Glen Tyler - are more often than not on course cheering home their beloved mare and they are enjoying every second of her career.

"This is the fifth time we have been in the winners circle since Mitch took over this mare," Tyler said.

"We are a group of blokes who all played footy together and formed a syndicate and it has been a great ride!"
With more to come hopefully - "by the way she won tonight I don't think she will be heading to the paddock any time soon!"