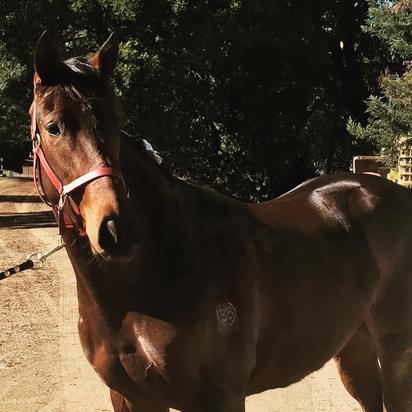 She has been a horse with issues but she is also a horse with talent and Runaway Suzie was able to put her best hoof forward when coming the very first winner on the new Ballarat synthetic track on Sunday.

Settling last of the seven runners contesting the 1200m maiden, the three-year-old really charged home out wide and from the 100m she was off and away - her winning margin a convincing 2 1/2 lengths.

"He began evenly and I just let her settle where she was comfortable," reported jockey Declan Bates.

"She really quickened nicely off the bend and I knew a fair way out that she was going to get there."

It was start number six for Runawaysuzie who has not had the best of luck during her short career.

"She used to tie-up badly," Mitch said, "and recently she has been having foot issues so we sent her down to David Noonan at the beach to do a bit of work with her."

Managaing owner Kylie-Bridget Bax, whose family bred the daughter of Sepoy, was delighted to see her break through - "it has been a difficult journey but I think Mitch has figured her out."

"I knew she had talent when I broker her in and pre-trained her and it has been great that Mitch has given her the time she deserves... I am grateful that was have such a talented trainer preparing our filly."

Runawaysuzie is the first winner for the winning Montjeu mare Runeasy, half-sister to the dual Group winner Silky Red Boxer and full sister to the dam of the triple Gr.1 winner Lucia Valentina.

Served last spring by Shamexpress having produced a Turn Me Loose colt in early November, Runeasy can also boast amongst her relations the Gr.1 winners Danzdanzdance and All Thrills Too.