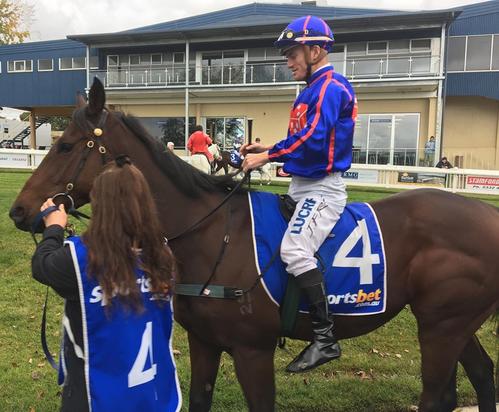 Sometimes something just clicks in the mind of the thoroughbred - we don't always know what it is, but when he decides that he rather enjoys the sensation of victory - there is cause for celebration!

Elton's Song had hardly been flying in the lead up to Sunday's 1500m maiden at Ballarat, beaten five and nearly seven lengths at his previous two runs back from a spell. But he was up in distance and since his last start had been better than ever.

"He improved a lot since his Warracknabeal run," Mitch said.

"I don't really know why but his action was better, his work was better. So we came to the race confident of a top three finish and he went even better than that!"

Breaking through at his eighth start, Elton's Song sat at the rear of the field, Jarrod Fry getting him a bit closer to the action as they neared the turn.

Widest into the straight as the leaders got clear, the three-year-old chased hard, hitting the lead with 100m and getting clear to salute by a soft 1 1/2 lengths to the tune of the race call "Mitch Freedman is cleaning up!"

"They rolled along nicely and from the 600m he just towed me into the race," Fry said.

"I was pretty confident all the way, the good speed helped and when I pushed the button he really lengthened out well."

Elton's Song is raced by the Roll The Dice Syndicate who was represented on course by a delighted Rob Norton.

"He has always shown ability, he probably should've won his first start. Mitch has just kept tinking away with him, he thought he was a chance today and he was spot on."

"We are thrilled with the relationship we are building with Mitch," he continued - "which we hope to continue long into the future."

A graduate of the 2017 Gold Coast Magic Millions, Elton's Song is by Fastnet Rock's BTC Cup winner Your Song out of the Sebring mare Apamene, a half-sister to the Gr.1 sprinter Takedown.

Served last spring by Stratum Star having produced a filly by that same stallion in mid-August, Apamene hails from the internationally prolific Best In Show family that produced the champion stallion Redoute's Choice.