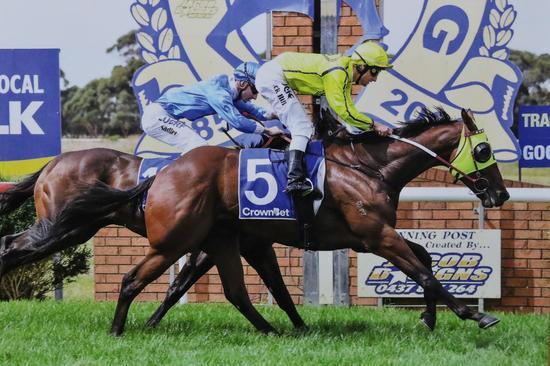 It is never an easy task for a horse to make his way back into form off injury and the connections of Ransom Money have had to be patient, the bay needing a fair bit of time and care having suffered from a suspensory problem last year.

Off the scene between July 2018 and April this year, the son of Tickets was a metropolitan winner in late 2017 and it has been exciting of his owners to see him come up so well for us this time in - and all the more thrilling when he was in winning form at Ballarat on Monday.

Catching the eye with a late charge for second at Warracknabeal when resuming on April 20, Ransom Money was close up in a small field second up at Donald, not completely happy in the soft conditions.

The run had him nicely primed for his third up assignment effort in the BM 58 1400m contest however and it was a lovely ride by the in-form Jessica Eaton who eased him out of an early speed battle off a good start.

"He jumped quite well and we managed to get into a good spot without getting too far back," she said, "though I was a little bit worried about being on the fence."

Fortunately there was room approaching the turn to have him out into the open and Eaton did a great job easing him into a great spot without asking him to burn much energy - so much so that she feared that he may have made his run a bit too soon.

"He pricked his ears when he got to them and probably took a bit longer to put them away than he should've but it was a good win."

"He was super fresh," Mitchell said, "and he probably just lacked that bit of fitness on wet ground second up. We gave him a trial at Avoca in between runs and he had been working well here on the synthetic."

"It was good to see him get off the fence and be able to build momentum - he is in great shape and going really well coming back from that injury."

"Jessica is riding in great form and I am looking forward to supporting her when I can."

Bred in Victoria by John Rayner, Ransom Money is one of three winners produced by the Red Ransom mare Play Money whose dam Amuse is a half-sister to the Gr.1 winning sprinters Masked Party and Festal and to the dam of fellow big race winners Inspiration and Wandjina.