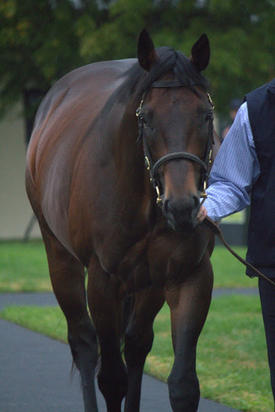 How good it was to see Lucky Wick so quickly strike winning form for the stable, the former South Australian coming to us from her previous trainers Wayne Francis & Glen Kent in great condition, giving us plenty to work with!

Not having the best of runs from a wide gate when resuming at Echuca a couple of weeks ago, the daughter of Myboycharlie (pictured) did a good job finishing a close up fifth and jockey Jarrod Fry was confident that he would take benefit from that hit-out.

"She only had to take the next step today which he did - and she won quite well," he said.

"Se was smoking at the corner and once we had clear air it was just a matter of when I pushed the button."

"She has been building nicely since coming over from South Australia," Mitchell said, confident that the five-year-old would run a good race though by no means thinking her a good thing - "I actually thought she might need one more run but she was bolting at the turn."

"Jarrod did a good job not asking for her effort too early and when he did she sprinted quickly. I think she might step up over a bit further in coming months."

Mitchell was pleased to provide Lucky Wick's owner/breeder Ron Turnbull with a win whilst Turnbull was very excited having driven over from South Australia for the race.

"This is my first horse with Mitch," he said, adding that he sent the mare to Ballarat due to the greater options re race programming in Victoria.

"There are a lot more opportunities for her to find the right race here," he said.

"I did a bit of homework before deciding which trainer would suit and picked out Mitch as a man on the up!"

Lucky Wick is one of four winners for the Kyneton winning Fasliyev mare Ballet Belle who was also raced by Turnbull. A half-sister to the Newcastle & Gosford Cup winner Silent Impact, she is also dam of the city placed five times winner Belle Of The South from the family of the two times Gr.1 winning Hong Kong galloper Beat The Clock.

Lucky Wick's success was the second leg of a running double for the stable and Mitchell was keen to thank his staff - "they do such a good job at home, we have some really high qualit horse people working with us."