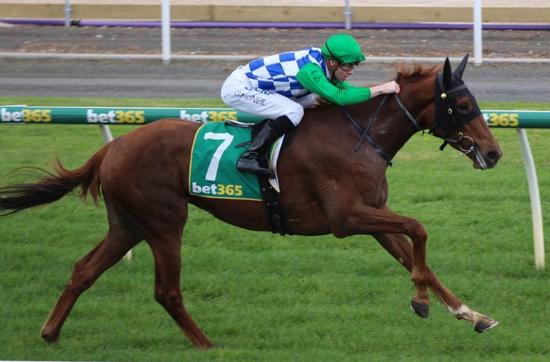 How apt it was that the very first winner by the triple Group winner Puissance de Lune be trained by Mitchell Freedman and be owned by John Sutcliffe and Gerry Ryan.

Whilst Freedman had a lot to do with the high class grey during his racing career, Ryan raced the horse, supporting him at Swettenham Stud with some very nice mares including the stakes winner Manhattan Maid who he also bred.

That Listed winner of the Dequetteville Stakes was raced by Sutcliffe and at Geelong on Friday Freedman, Sutcliffe and Ryan combined to cheer on Moonlight Maid - an exciting filly who could not have kicked off her racing career in better fashion.

Covering ground but always travelling well for Jye McNeil, the good sized chestnut settled back but edged closer around the back of the track and was into clear room straightening.

Getting to the better going out wide she was a bit green early in the straight, inclined to duck in a little, but once straightned she was off and away - charging home to win by an impressive 2 1/4 lengths.

It was the first time McNeil had been aboard Moonlight Maid and he was taken by her performance.

"Jarrod Fry had been trialling her and he and Mitch gave me a good insight into her path leading into today," he said.

"Things did not really work out from the barrier but she was balanced and in a good rhythm... and she put them away easily."

"She seemed to handle the conditions well, which is a great thing to learn early in a horse's career."

Freedman admitted that he had not been "100% sure about the conditions... but Jye just kept her on an even keel the whole way and didn't stop and start her momentum."

"I expected her to run very well," he said. "She has had only one very very soft jump out this time in but we galloped her with a maiden winner on Saturday and she blew him out of the water so after that we were pretty confident about her."

"She was so strong through the line... she is a pretty classy filly with a good future."

Having also had much to do with Manhattan Maid, Freedman got a special thrill from this win, especially as the owners have always been good supporters - "it was our first runner in Gerry Ryan's, it is great that it was a winner!"

A couple of stakes races are possibilities for Moonlight Maid or she may to go the paddock in preparation for the spring - "we will see how she comes out of this and make a plan from there," Freedman said.

Moonlight Maid is the second foal produced by Manhattan Maid whose first is the recent Geelong winner Maid Equal. Not having much luck since producing these two nice fillies, she was served last spring by the Gr.1 sprinter Hellbent.