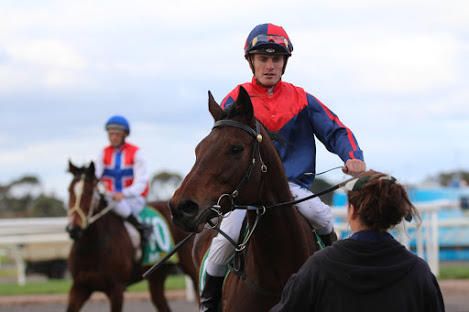 What a great addition to the stable Lucky Wick is proving to be, the up-and-coming mare winning a Hamilton BM58 contest in easy fashion at just her second start for us - going right on with the job with an even more impressive victory at BM64 level at Geelong on Friday.

Having only ever been tried over sprinting trips during her time in South Australia, Lucky Wick has from the time she arrived at Ballarat shown that she would appreciate a bit more ground and her latest success came at her first attempt beyond 1400m... and she ate up every inch of the 1540m!

"I was mindful that she was having her first run at the trip," jockey Jarrod Fry reported, adding that the five-year-old "ran it out strongly."

Fry had expressed some concern, noting that Lucky Wick has a light mouth and can still do a few things wrong - "you just have to be really patient and gentle with her but I have done a lot of work on her so I understand her... and she is racing really well."

"She still wants to over-do it a bit," Freedman added, "but she is just going so well. I think she can sneak a race in town on wet ground and once we get her to switch off and just bring her head down a bit more she can probably get 2000m."

"Every thing she has done at home has been very impressive," he said, happy to be providing enthusiastic new stable client Ron Turnbull - who races his mare in the navy and red colours of the Wycheproof football club.

"It is a shame he couldn't be here today as he really loves this mare," Freedman said.