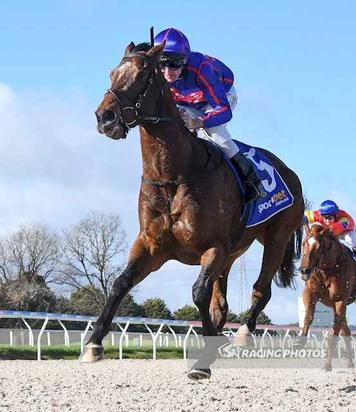 It was a deserved break through for the consistent Dee Jay Artie at Ballarat on Thursday, the three-year-old having been so honest in the lead up to his maiden victory - game finishing in the placings at three his five previous outings.

Not having the best of luck when forced wide when finishing third at Hamilton a couple of weeks ago, the bay enjoyed a nicer run this time out, patiently steered by Brad Rawiller who as confident throughout.

"We got a nice trail into the race which was pretty important from the outside barrier and it all worked up well. He got in easily and got a good cart up."

"He probably just got there a bit too soon and he got a little wayward late but he was just too good for them."

Showing heart wearing down the leaders and getting the upperhand late to win by half a length, Dee Jay Artie still has a bit to learn but is coming along nicely - "Brad did have to pop out and expose him a bit early," Freedman said, "but he never got stopped in his tracks and was able to sustain a long run."

Providing the stable with our fifth win on the new synthetic track, Dee Jay Artie races in the Roll The Dice colours. He is a son of Artie Schiller and the unraced Bel Esprit mare Debra Joy whose third dam is the UK sprinting star Habibti, half-sister to the legendary broodmare Eight Carat.