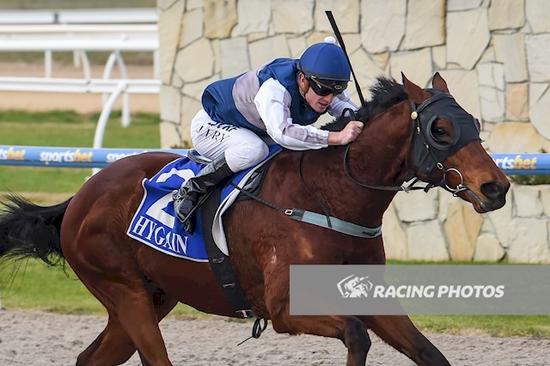 A milestone for Fast Plan at Pakenham today; in recording the fifth success of his 29 start career the consistent five-year-old was able to increase his prize money tally beyond six figures.

And he did it easy style too, settling back in a race run to suit - peeling out into the clear turning, hitting the lead before the 200m and dashing clear to win by 3/4 length looking to have plenty in hand.

Jockey Jarrod Fry admitted to being wary of the odds-on favourite Caffrey who had been so impressive at debut but, having followed him throughout, was happy coming to the turn - "we got a beautiful cart into the straight and I felt that we were travelling better than the favourite," he reported.

"He was going to switch off a bit once he got to the lead but when the runner-up game to him he gave a good kick and he was strong to the line."

"We thought he had a good chance coming into today," Mitch said, all the happier as the race unfolded - "I thought once he peeled off the favourite's back he was going to have a bit to offer."

Bred by his happy owners, the son of the late Strategic is the first foal produced by the metropolitan winning Octagonal mare What A Beauty.

A half-sister to one of Strategic's best runners, the dual Group One winner Platelet, What A Beauty produced a colt by the Breeders' Cup Turf Sprint winner Bobby's Kitten last spring and was subsequently served by Smart Missile.