Harry In A Hurry 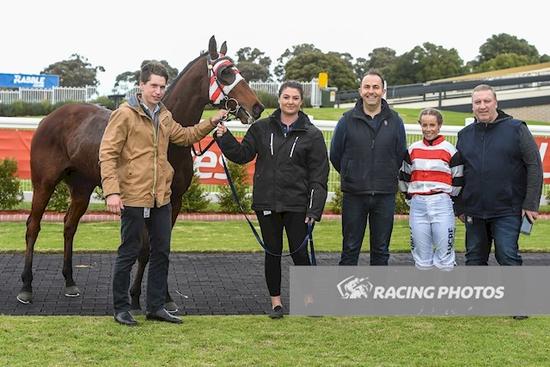 A masterclass display of riding by Jessica Eaton saw Captain Harry record an exciting victory at Sandown on Wednesday, the four-year-old from an outside gate finding a nice position along the rails - always travelling well though a long way off the front runners.

But Eaton was patient, saving good ground turning - sneaking away from the fence into better ground before switching back towards the rails at the 300m, joining the lead with 250m to go and quickly gaining the upper hand.

A length was the winning margin for the consistent horse who has now won five of his 29 starts with a further eight placings on his resume. It was the first metropolitan success for the gelding who has now amassed over $170,000 in stakes.

Two of his wins have come with Eaton aboard and she has plenty of time for those horse, noting that he gave her a great feel even before the race - "he felt enormous going to the gates so I had a lot of confidence."

"He travelled really well and I was happy, it was just a matter of getting the run."

"He saved the ground turning and was too good."

"It was a really good effort," Mitch Freedman said, admitting that he had "toyed with the idea of scratching."

"I was not sure if the track was going to be soft enough for him!"

Fortunately he took the chance of running and hatched a good plan with Eaton - "he tends to miss the start a little bit so we knew he would get back. Jessica thought the fence was not a bad place to be, especially with the headwind."

"It all panned out perfectly," he said, "and he was strong to the line."

"He is only a small horse so when he is down in the weights it works out well for him," he added - happy to take advantage of the in-form Eaton's 3kg claim.

Captain Harry is raced by his breeders led by Australian Thoroughbred Bloodstock. He is a son of the late Commands and the Sandown winning Grandera mare Queenera. A half-sister to the Gr.3 Vanity Stakes winner Tallow, Queenera was served last spring by the flashy chestnut Palentino.