Deserved Success For Hard Up 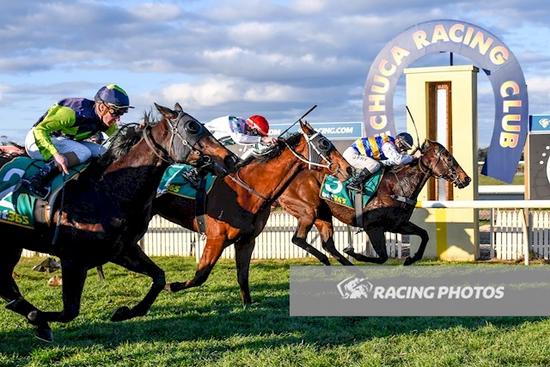 Two years and one day.

Since Hard Up was last in the winner's circle, making his gutsy victory at Echuca on Monday a well deserved one!

It had been a long wait between drinks for connections but Hard Up who had been patient as the son of Hard Spun recovered from injury, one which saw him away from the races between October 2017 and March this year.

Since that time he has been in great form; four times finishing runner up from eight starts, not once out of the first five.

Having caught the eye with a late charge to only just miss out on the prize at his previous outing, Hard Up was sent out favourite in the 1200m BM64 contest and was always travelling well mid-field for regular rider Jarrod Fry.

Approaching the turn Fry had brief reason for concern as a rival kicked up on his inside but Hard Up was soon into the clear and chasing, showing plenty of heart over the final stages... recording win number three from 17 starts.

"He had been knocking on the door and it was good to see him break through," Fry said.

"It got a bit tricky on the corner but he was game and really willing to get to the line."

"It was a good tough effort," Freedman added, noting that off "a consistent preparation he had been very deserving of a win."

"He had been struggling with bad barrier draws and two runs back didn't handle the blinkers but things went right today which is great for his connections."

Raced by his breeder Michael Hirst and friends, Hard Up is one of four winners from as many foals for the imported Street Cry mare Broadway Ellie who sadly died in early 2016.

Hailing from a good American family, Hard Up is a grandson of the stakes winner Marisa Go whilst his sixth dam is the influential Kentucky Oaks winner Lalun, dam of the prolific stallions Never Bend and Bold Reason.