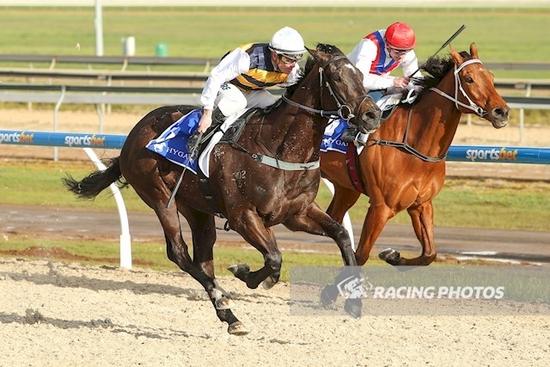 What looked to be a sticky situation for Urban Lumberjack at Ballarat on Monday actually turned out to be in the lightly raced and promising four-year-old's favour... as jockey Jarrod Fry explained.

We ended up in an awkward spot," he said - noting that the gelding did not have a great deal of room turning - "but it probably suited the horse."

In so much as the gaps did not open for Urban Lumberjack until half way down the straight, good timing for a horse who "is still learning how to let down."

"Once he hits the front he switches off a bit so I didn't want to expose him too early," Fry said.

"He travelled really well into the straight and once that gap appeared he put them away in two or three strides... but he did switch off that bit."

Something which can be seen on replays, Urban Lumberjack green over the final stages... but still impressively strong to the line, drawing clear late to win by 3/4 length with plenty in hand.

Having just his second start for the stable, the son of High Chaparral's Gr.1 winner Redwood was sent out favourite in the 1400m BM58 event having finished off so well over 1200m at his previous outing.

"He has a few niggling issues we need to overcome but he is bred to get over further and he is still very much learning his craft."

There are no major ambitions for Urban Lumberjack's current campaign other than to see him figure things out a bit - "a good result for this preparation would be for him to learn what it is all about."

Raced by OTI Racing, Urban Lumberjack is out of the Red Ransom mare Margravine, half-sister to the Listed Gosford Guineas winner Latin News. Paying a return visit to Redwood last spring, she hails from the family of the Golden Slipper winning successful stallion Marauding.