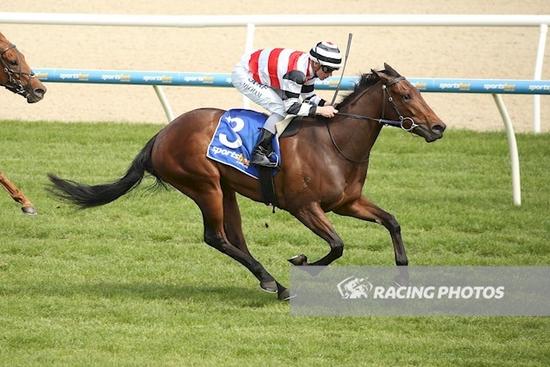 It did not take long for Broadwayandfourth to impress racegoers as she charged home to break her maiden in easy fashion at Ballarat on Tuesday - the promising three-year-old having just her second start.

Catching the eye with a good finish without the best of luck when debuting at Geelong last month, the daughter of Smart Missile drew the second outside barrier in the 1200m maiden but Mitch was happy with that - keen to see the still inexperienced filly get galloping room.

Which she did, settling last for Ben Melham who had her flushed out from before the turn - letting her loose in the straight.

Quickly gathering in her rivals, Broadwayandfourth was still a bit "new" but her winning margin of 1 3/4 lengths suggests that she has her fair share of talent.

"She is quite raw but she has got nice ability," Melham said.

"They did not go as quickly as I thought so I just had to expose her a bit earlier than I would've liked and she got a bit lost when she hit the front."

"But I was always confident that she was going to pick them up. She is a lovely filly who I think is capable of winning better races."

Mitch agreed, noting that "we have always had a good opinion of her."

"We did a lot of conditioning work leading to her first official trial but had not really pressed the button till then. Now that we have she is starting to show a bit."

"We were pretty happy going into her first run but she did not have a lot of luck but she had that galloping room today and she was strong at the finish even though she did get a bit lost early."

"She is a very, very tough filly," he added - "you can give her a good gallop and she goes home and licks the bin clean."

"I think we can get to some nice heights with her down the track."

A home-bred for Australian Thoroughbred Bloodstock and Bungan Street Thoroughbreds, Broadwayandfourth is the third runner and third winner for the stakes winning Statue of Liberty mare Broadway Harmony.

Also dam of the city winner Broadway And First and the two times winner Ol' Blue Eyes (also by Smart Missile), Broadway Harmony was served last spring by Dissident and has yet to be named youngsters by Dissident and Wandjina.