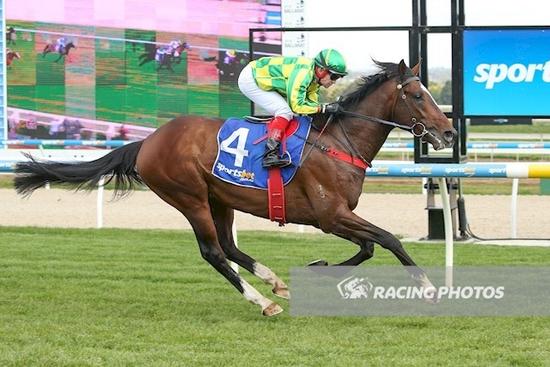 He may not have had the most ideal of runs covering ground in the 1400m maiden at Ballarat on Friday but Living The Dream was always travelling well in a smooth rhythm for Dean Yendall.

Breaking through for a deserved success having not been out of the first five in her his first four starts, the lightly raced four-year-old loomed up ominously at the turn, third in to the straight and chasing gamely as the leader gave a kick.

And it was all over at the 200m, Living The Dream hitting the lead and racing away to win by 1 3/4 lengths, looking to have a bit in hand.

"We got left three wide but he was travelling well, he wasn't overdoing it," Yendall reported.

"I just let him work into it a bit earlier than normal and he found the line well without me having to do a lot - I like the way he knuckled down."

Patience has been the key to Living The Dream with Mitch noting that "he is a very good looking horse who has just taken a while to put it all together."

"He got stuck out a little bit wide from the half mile but it was a positive ride and it worked out well. I think he will get that bit better when he gets up to the mile and there are some nice races for him at Moonee Valley over the summer months - I think we will head down that track."

Visiting Artie Schiller at five of her six years at stud to date, she is also the dam of the dual city winner Arties Dreamwinner. A descendant of the famed matriarch Eulogy, she is out of the stakes winning mare Aldarch whose grandam is the Queen Of The Turf Stakes winner Harbor Flo.