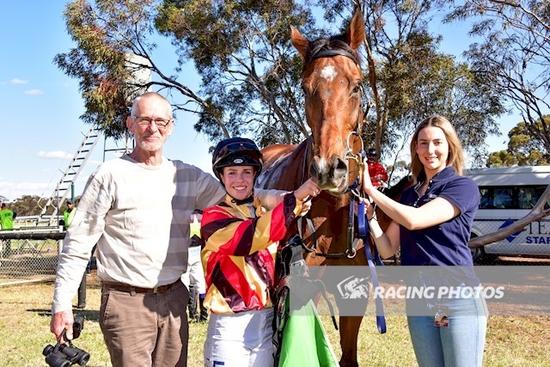 It was a lovely bit of Deja vu on Saturday as the tough campaigner Not To Know took out his second consecutive Manangatang Cup.

And it was on the back of similar form to his success last year too, something punters had taken note of sending him out one of the favourites in the 2000m contest.

Recording the sixth success of his 34 start career - in doing so increasing his prize money tally to beyond $116,000, Not To Know was partnered by Jessica Eaton who was having her first ride on the nine-year-old.

Sitting fourth in a strongly run race, Not To Know travelled well throughout - so well in fact that he was able to make his run a long way out, putting pressure on his rivals as he took on the leaders from well before the turn.

Looming up strongly as he entered the straight, Not To Know had horses on his inside and far out wider - hard to line up for those watching - but it was clear over the final 200m that he had his rivals measure as he raced away to a soft 3/4 length victory.

"He is a tough old horse," Mitch enthused, adding that "he is a pleasure to have around the stable."

"His owner Bruce Pitts followed him up there and had a great day out. Hopefully he can hold it together and maybe be there again next year!"

Bred by Pitts and raced with his family, Not To Know is a son of the now deceased US Group One winner Nothing To Lose and the placed Knowledge mare Last To Know who is also no longer with us.

She produced four foals, three of whom are winners including Not To Know's full brothers; his three times winning stablemate Unbeknown and the Eagle Farm winner Knowing Frank.

Last To Know's dam is the Bagot Handicap winner Camilla whose six winners included the Listed winner Never Off The Bit and this is also the family of the Brisbane Cup winner Sky Flyer, the Adelaide Cup winner Dealer's Choice and the New Zealand Derby hero Piko.