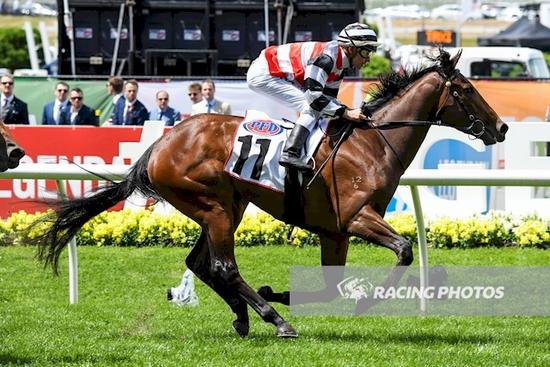 The spring carnival is proving a great one for the stable, on the back of her Edward Manifold Stakes victory Moonlight Maid finishing on gamely when second in the Moonee Valley Vase on Saturday.

And though she was so gallant in defeat, her Gr.2 second not the highlight of the day - that honour going to the lightly raced and promising Broadwayandfourth who was so impressive taking out the Listed William Crockett Stakes at just her third outing.

Double figure odds facing the challenge of stepping straight up from a maiden to taking on some of the best sprinting fillies around, Broadwayandfourth won with the authority of a horse much shorter in the market!

Getting back off a tardy start for Ben Melham (who has been aboard the three-year-old at each of her three starts to date), Broadwayandfourth was off the rails approaching the turn but coming around the corner there was not much room for her.

Fortunately she has the sort of acceleration that enables her to switch course whilst still making ground and as she ducked along the inside of those swinging wider she was able to pick up valuable lengths.

Showing an impressive turn of foot as she charged up along the inside of her rivals, Broadwayandfourth drew clear over the final stages to win by a length - looking to have plenty in hand.

"I knew she had the class if she got the right run," Melham enthused.

"They went quick enough but it was a bit of a messy race - we were able avoid some of the trouble on the corner and from there everything went to plan. As soon as we straightened up and got a clear run she was able to put the race away quickly."

"She's a cracker!" said a delighted Mitchell Freedman, adding that "she has always shown us a lot of ability at home."

"Ben and I walked the track together and we think we found the right part in the straight - it was good to see her get a clear run from the top of the straight and she was strong to the line."

"I knew she was up to it. She had raced around black type horses at her first two starts and she'd had a soft trial since her last start, as well as a gallop on the grass at Ballarat... and Ben was confident."

Excited about Broadwayandfourth's future, Freedman is confident that the daughter of Smart Missile will be all the better next time around... "I'd like to give her a break, let her grow and develop a bit more and maybe target a race like the Sangster Stakes."