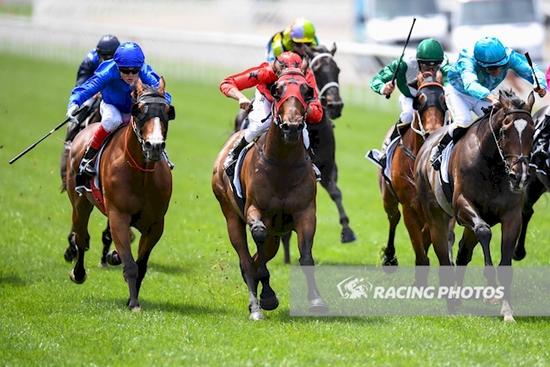 A magical moment to be long treasured... our first Melbourne Cup Carnival winner! And on Melbourne Cup Day too, when all racing eyes are on Flemington... how exciting to think of the tens of thousands of people who were watching on as our very own Bravo Tango so gamely stretched out his nose to claim victory in the 1400m event.

"A great thrill," Mitchell enthused, noting that winning in front of such a big ground on Australia's biggest race days "ticks a lot of boxes!"

"He has been a frustrating horse," he said, "but it was good to see him deliver on a day like this."

"He has always shown a lot of ability, we think he is right up to top class - but he has just had to deal with some immaturity issues along the way."

"Big thanks to my staff, the farrier, our vets, the spelling farm - everyone has looked after him really well."

Enjoying a good trail midfield under the guidance of Billy Egan, Bravo Tango was out into the middle of the track in the straight with three others fighting on his inside. From the 200m it was a great battle to the line, our boy showing great heart to prevail over the final stages.

It was win number six from 17 starts for the talented gelding, one which increased his prize money tally to beyond $260,000, a great effort for the graduate of the 2016 Inglis Classic Yearling Sale.

There were plenty of happy owners on course including manager Michael McGrath who has been such a great supporter of the stable.

"It was a well deserved win by a horse who has been a hard one to manage," he said.

"Mitch and his staff have done a fabulous job on working out his foibles, presenting him to the races on the fresh side each start with three weeks between runs - and changing his work around a bit."

"We are very happy for Mitch and Jenna and the team as we know how much Bravo has had them baffled and frustrated at times!"

"Billy Egan followed Mitch's instructions to the letter... he got him to jump beautifully, had him a good position early, got him to relax and then timed his run well down that long Flemington straight."

"It was a peach of a ride and Billy deserved a lot of credit for that," he noted, adding that "the Flemington straight does suit Bravo's style of racing."

It was the second time McGrath has cheered home a Flemington winner with us, the other being the stable's first at Headquaters - Shenzhou Steeds successful over 1700m in the winter of 2015.

Members of St Pats Punting were also jubilant, the group who met at St Patrick's College in Ballarat already on a high having the night before celebrating syndicate manager Andrew Gray's 50th birthday.

"We got a group together to buy a share in a horse and now here we all are on Cup Day!" he said.

"It was a great win, and a credit to Mitch - a great young trainer coming through."

Unfortunately Michael Caporale was one owner who could not attend having undergone heart surgery last week but we were thinking of him - "this will be a great fillip for him," Mitchell said.