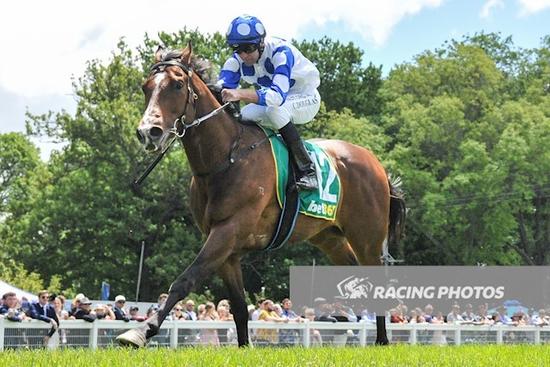 "We've got a really good bunch of three-year-olds," said a happy Mitchell Freedman after an impressive performance by the exciting colt Zorro's Dream at Kyneton on Wednesday.

Still on a high on the back of great Flemington carnival performances by Southern Moon and Bravo Tango - at the same time excited about the prospects of Moonlight Maid in Thursday's VRC Oaks - Mitchell noted how pleased he is that things are going so well.

"Everyone is working hard behind the scenes and it is showing up on race day."

Having just his second start having gone close at his debut on Cranbourne Cup Day, Zorro's Dream had nice cover during the running of the 1200m Super VOBIS contest, Clayton Douglas happy to take an early sit before letting him stride into the straight.

Proving a class above his rivals, Zorro's Dream raced clear to an impressive 2 3/4 length victory.

"He is a really nice horse," Douglas said.

"I was lucky enough to trial him on Monday and he gave me a really nice feel - I thought he would come here and do that."

"He has got quite an explosive turn of foot and I actually think he will be better ridden more quietly."

Mitchell agreed - "if he'd had something to chase I think he may have gone even better."

"He is a promising horse," he added. "We toyed with the idea of setting for some better races this spring but he is not quite ready for it."

"There is a nice VOBIS Gold race over 1400m on Ballarat Cup Day for him and the way he powered through the line today suggests that he will gobble that up."

Bred by successful local breeder Ken Breese, he is a half-brother to the six times winner Cranbrook.

A daughter of the triple Group winning Perugino mare Tickle My, Il Sogno only recently foaled an Impending filly and she also has yet to race youngsters by Smart Missile and Magnus.