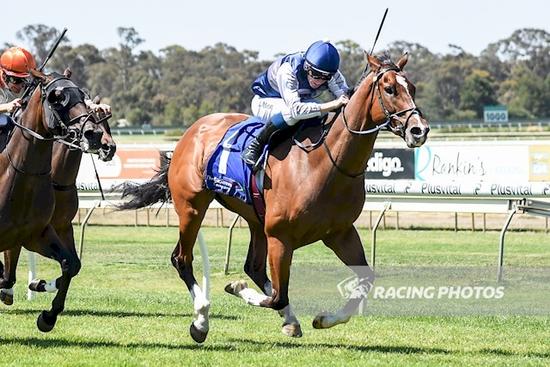 "Here comes the 747 Bowing!" declared the race caller as our big boy charged to the line at Bendigo on Thursday - doing a great job winning his second race from just three runs this time in.

A horse who has always shown talent - given time after finishing close up at his first two starts earlier in the year - Bowing broke his maiden over 1400m when resuming, was strong to the line up in grade at that same trip when finishing runner-up second up; that run seeing him sent out at $1.50 third up.

Travelling sweetly back in the field for John Allen who was having his first ride on the four-year-old, Bowing made a run around them into the straight, quickly ambling up to his rivals and getting clear - holding on gamely as Rebel Romance made a late charge to cut the margin back to half a length.

"It was a good effort," Allen said.

"We had to make a bit of a run around them which was not ideal with the big weight (3kg more than the runner-up) and when he got there he waited a bit - but when he heard the other horse coming with 100m to he did pick up again and there was more in the tank."

Purchased at the 2017 Karaka Select Yearling Sale, Bowing is by Galileo's triple Gr.1 winner Rip Van Winkle from the immediate family of star stallion Invincible Spirit... and further back this is also the family that produced the great influences Danzig and Bletchingly.