OWNER OF THE MONTH – Mike Hirst 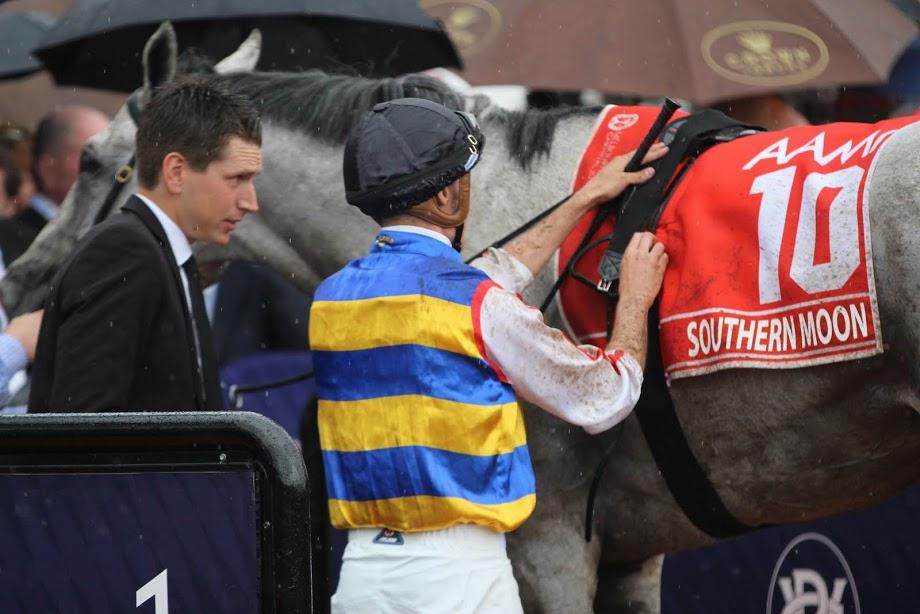 “The aim,” said Mike Hirst, “has always been to breed a Derby winner.”

And how close the passionate racing fan went this year when Southern Moon stormed home to a courageous second to Warning in the Flemington Classic.

There is quite the back story to that talented 3Y0… how he came to exist, how he ended up under the care of Mitch and how his owner/breeder became a racing fan in the first place.

Whilst his parents had no real interest in the game, racing struck a chord early with Mike. Perhaps it was in his genes with his mother’s grandfather managing Shirley Park for Hilton Nicholas, training some handy horses including the classy stayer Morse Code who finished third in Comic Court’s Melbourne Cup in 1950.

“There were stories about racing in my family but no real interest though I used to ride a bit as a kid,” Mike recalled.

Fast forward to Mike’s early adulthood and he is embarking on a career in banking, spending four years in a Ballarat. It is there that New Zealand trainer Paddy Payne decides to set up his Australian base and the financing is arranged at the local bank.

Paddy and Mike hit it off and one day Paddy strolls into the bank… “I have bought two horses, and you are in one of them.”

And so a decades long love of the thoroughbred begins and Mike cheers home winners with several members of the Payne family. A few of them are strapped by a young Mitch Freedman, Mike was keen to back him once he went out on his own.

And what a great support he has been – his home-bred Royal Glance being both Mitch’s first winner (March 2014 at Werribee) and his first city winner (Sandown in April 2014).

It was only natural that Mike consider Mitch to train Southern Moon, the impressive grey being a son of Puissance de Lune whom Mitch had so much to do with during his time at Warrnambool.

So why Puissance de Lune for the mare Street Cry? Well that goes back to research… and a lot of it.

“When I started breeding I did a lot of reading about theories and the one that resonated most with me regarded reinforcing outstanding mares in pedigrees.”

One mare in particular caught Mike’s attention, the 1955 Kentucky Oaks winner Lalun whose triple Group One winning Kentucky Derby placed sons Never Bend and Bold Reason have been of such influence.

Both are prolific in pedigrees but harder to find are Lalun’s direct descendants. But, after spending several days ploughing through online stud book records, Mike found one – a yearling filly who had only recently been sold to an owner in northern Queensland.

But the owner did not want to sell. Fortunately Mike perservered.

“She didn’t run a placing at her first couple of starts so I rang back but he was still confident in her ability. I said I still wanted to buy her but that my offer would decrease by $1000 with each unplaced run.”

And so he acquired River Royal, a daughter of the Irish River stallion River Light, for just $3000 with her only placing in seven starts a third in a Rockhampton 1200m maiden.

She may not have been over endowed with ability but what River Royal did have was breeding – not only was she a great great granddaughter of Lalun but she was also line-bred to her with Irish River being a grandson of Never Bend.

Meanwhile her dam sire was King Pellinore, a good horse but not a stud success. But what a pedigree he had, his dam Thong being the great grandam of the mighty Sadler’s Wells.

Whose dam sire is Lalun’s boy Bold Reason! And so Mike embarked on his search for suitable Sadler’s Wells line horses for his new mare.

There was not a lot of choice in this part of the world at the time but River Royal produced four winners by sons of Sadler’s Wells – including the city winning stayer Prince Of Scribes (by Runyon) and the metropolitan winning hurdler Awakening Dream (by Aristotle).

Horses with plenty of stamina but not a lot of zip and that was the ingredient Mike was keen to add in, hence his decision to send River Royal’s placed daughter by Sadler’s Wells stallion Festival Hall to Street Cry.

More Lalun via Never Bend and Riverman in that great stallion. The result was not a great racetrack success though South Street did win a maiden at Terang. And not too far into her stud career Puissance de Lune was retired to stand at Swettenham Stud.

So much faith did Mike have in that horse as a match for South Street (more Never Bend as well as a 4 X 3 cross of the Irish Oaks winner Helen Street) that he sent her to him three times. She missed on one of those occasions but there is a yearling colt in Michael’s paddock whilst the first result is Southern Moon.

Whilst greys are never born that colour, there is often an early sign of how their coat will turn and in this fellow’s case it was in the shape of distinct rings around his eyes, making him very easy to name… from day one this classy galloper affectionately known as “Goggles.”

Whilst a good sized foal, it was as a yearling that Goggles really started to blossom though trainers who inspected him said he would need a bit of time. Fine for Mike, a patient breeder and owner with the Classics in sight.

Still however Southern Moon did get a run in at two, striking servere interference in a Warrnambool 1200m race in May but finding the line well – recording the fastest late splits, giving Mitch and Mike confidence in the young horse’s future.

Reappearing in a Bendigo 1600m maiden in mid-September, Southern Moon got back off a tardy start but was charging to the line. Stepped up to the 1800m of the Derby Trial at Flemington he was again doing his best work late finishing a somewhat unlucky second having been held up at a vital stage.

A Donald 2000m maiden in early October was the perfect next step and as an odds-on favourite he raced away to a dominant two length victory. A tricky barrier saw him forced to be ridden against his normal pattern in the Listed Geelong Classic but again he was a gallant second… and all was in place for a crack at Mike’s dream race, the VRC Derby.

“It was rather nerve-wracking,” he admitted, hardly surprising when one is standing at the threshold of realising a life-long dream! And of course Southern Moon ran a great race, so gamely chasing home Warning with another length to the third placed Soul Patch.

It wasn’t a win but it was close and still a massive thrill for all involved and the story may not yet be over. Southern Moon is still young and lightly raced and then there is his full brother in the paddock.

And as we know, any breeder with an unraced young horse at home has that dream of greatness!