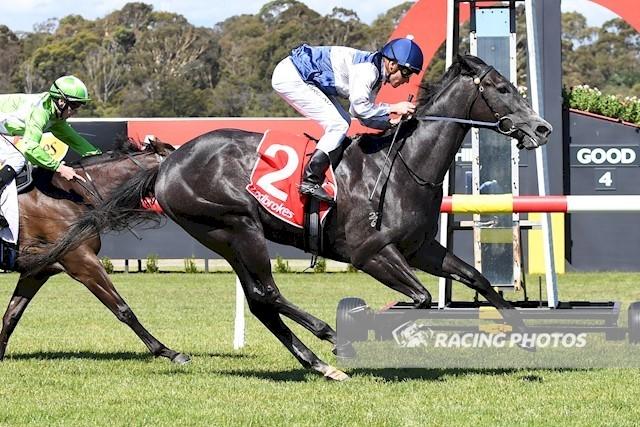 How nice it was to see everything go right for Briseur De Coeur at Sandown on Wednesday, the lightly raced and promising three-year-old not enjoying the best of luck at his first two starts… with a better run in transit able to show much what he is made of!

Settling nicely behind the leaders for Ben Melham, the attractive grey was into the clear in the straight, moving up at the 300m and getting clear late to salute by a length – looking to have a fair bit in hand.

It was the first time that Briseur De Coeur had drawn well, at his first start at Wangaratta in June getting back from the outside barrier of 14, finding trouble in running but still managing to finish an encouraging fourth.

Given time to mature, he was a bit stiff in the hamstrings off his first up run at Dunkeld but he was strong to the line there, finishing second having been unable to get into a good position from another tricky draw.

But this time, from barrier 5, all was good!

“He was always going to get a nice run from that gate,” reported Melham who was having his first ride on the up-and-coming gelding.

“He got to the front easily,” he added, “but did get a bit lost when he got there. But with a little of urging he found the line well.”

“He is a nice horse, still quite raw with really good upside,” he said.

“He was moving fluently this morning and I was very happy with him,” Freedman said.

“We thought the step up in distance today was suitable and it was a good ride with a good result.”

“We don’t rev him up at home, he has been a pretty straightforward hosre to train. I am not sure what level he will get to but we will find out as he gains more race day experience.”

A son of Nicconi raced by Jenna Freedman with breeders Rushton Park, Briseur De Coeur caught Mitch’s eye from day one… “Mitch loved him,” recalled Rushton Park’s Kayley Johnson who was delighted when the young trainer was keen to give the horse a go.

Recently foaling a filly by Frosted – since testing in foal to Pride Of Dubai – she is a granddaughter of the Blue Diamond Prelude winner Rosa’s Image from the family of stakes winners Rosa’s Joy, Rosa’s Spur, Pure Elation, Members Joy, Rosarino, Cohort, Rosa’s Path and Occidentalis.