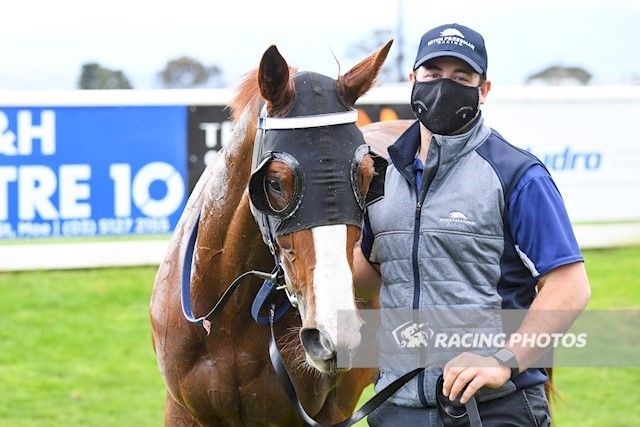 A trip to Moe on Monday September 13 saw Maree De Lune break her maiden after 10 starts. The stable has a great association with Puissance De Lune progeny and it is pleasing to see another winner for the stallion from the Mitch Freedman stable. The 5yo mare showed plenty of ability early in her career and has taken a little longer than expected to break her maiden, nonetheless a great result for connections.

Maree De Lune has been consistent this preparation but has been hampered by barriers, drawing wide on three of five occasions and the inside barrier in a race with no speed. Fortunately, a great ride by jockey Ben Allen overcame the wide draw and Maree produced the turn of foot which she showed earlier in her career. Ben Allen has had a strong association with the horse, including a close 2nd earlier in her career at Cranbourne over the same trip.

Allen explained post-race “she is a horse who showed early ability and I thought she would go on with it.” Freedman agreed with Allen’s comments and was relieved to see Maree break through. Freedman felt she “has been a little weak at the end of 2400m” and therefore the option to come back to 2050m seemed to be the best option in order to find the winners circle.

It was a pleasing result to get a result for Isaac Katz who is a fantastic supporter of the stable. Maree De Lune is being sold in the Inglis Digital September early sale, with the auction ending on Wednesday September 15.