Mitch Freedman is a young enthusiastic horseman who is dedicated to the life of racing. He is quickly making a name for himself and is well known and respected within the industry.

Mitch Freedman Racing is located at Ballarat in central Victoria and his new and impressive facilities are second to none to ensure your horse has the best of quality care and produces optimal performances on the racetrack.

Ballarat is ideally situated just an hour from Melbourne and easily accessible to all metropolitan, provincial and country racecourses to give your horse the opportunity to be perfectly placed.

Mitch and his wife Jenna are a formidable team and are well on their way to accomplish their racing dream and there’s no better place for an owner to begin or continue their racing journey than with Freedman Racing.

Give Val A Win!

Jan 25, 2020 An improver at each start has been Give Val A Ring and it was lovely to see her break her maiden in such impressive style at just her third outing - racing away from some well
Read More →

Jan 01, 2020 Country Cup number 3 for Not To Know, the tough nine-year-old kicking off our new year in great style with an easy win in the Burrumbeet Cup on Wednesday.Positively ridden by
Read More →

Dec 26, 2019 What an exciting finish it was in the BM58 1200m contest at Penshurst on Boxing Day, Woolsthorpe Reign engaging in a two horse war with Jenefactor over the final stages and
Read More → 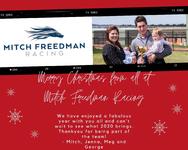